Independence Day Challenge and Homestead Updates for May 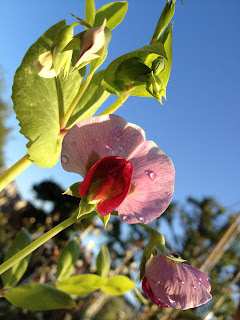 This month has completely gotten away from me. It's the kind of month that makes me wonder why the hell we are doing this.


[Maybe "doing" is the wrong word. It implies some level of success. We're hobbling. Or maybe I'm just hobbling. Bri has a much higher tolerance level for the mess that makes me feel like I'm failing. And also makes me feel crazy. I hate feeling crazy. Moving on.]


We should have planted the summer garden at least a month ago. We haven't. We haven't even pulled out the winter garden. Or the tomatoes from last summer for that matter. Of course, they've started producing again, so I'm not in any rush to do so. The copious weeds should have been pulled two months ago. Instead they've mostly gone to seed. I know we'll regret that soon enough.


But stuff is getting done. We hired some help for a couple days. I am always reluctant to do that, and I'm pretty much always glad we did after it's done. I've started reminding myself that farmers often hire seasonal labor to help with the big jobs. It's no great blow to my authenticity as a wannabe homesteader to bring in help sometimes (although, it is a blow to the pocketbook. And so it goes with both of us working more than full-time, for now.) 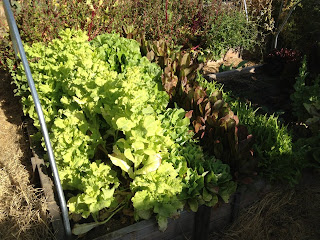 The lettuce is starting to bolt. We certainly have not eaten enough of it, but the ducks are not complaining. It's about the only thing that shuts them up. They're really not that loud, unless we're out back. Then they chatter incessantly. It alternates between entertaining and annoying as hell. 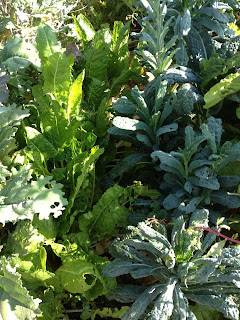 If chard and kale are biennials, mine didn't get the memo. About half of them are starting to bolt. 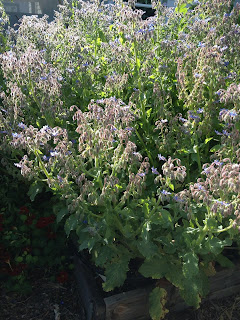 I never got around to planting this bed after pulling out the three sisters crop from summer. Borage has taken over. At least the bees are happy.


I spent four and a half lovely days with my dear friends in Portland. It was delightful. Three-quarters of my trip was spent feeding a hoard of children. It was fun to have so many people for whom to cook. But dang it if those little people aren't hungry all the freaking time! Honestly, I admire any mom who manages to get anything else done in a day beyond feeding and cleaning up after feeding their kids. I try not to think to much about the logistics of adding kids to our mix. It gives me anxiety. I'm sure it will be fine. Just. FINE. 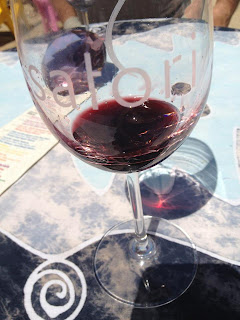 Bri and I also spent five days in Berkeley/North Fork/Gilroy. We went for a memorial service, but extended the trip on either end to see some friends. And go wine tasting.


It is becoming increasingly complicated to travel. It's not as easy as asking the neighbors to feed the cats for a couple days and dropping the dog off with my parents (if we don't take him). Nope, now there are birds to feed, eggs to collect, pots to water. Plus, as much as I try (and mostly succeed) to enjoy myself, I also spend vacations fretting about what I could be doing at home. It does suck some of the fun out of travel.


Despite being gone so much this month and a crazy work schedule on top of that, I did manage to get a few thing preserved, and we've been much better about eating from the garden, so that is encouraging.


Independence Days Challenge
Plant something: nothing, but may I take credit for the volunteers that have popped up? :)
Harvest something: strawberries, eggs, lettuce, kale, swiss chard, lemons, grapefruit, tomatoes, carrots, snap peas, turnips, white nectarines, apricots, loquats. The fruit is starting to come in. YAY! 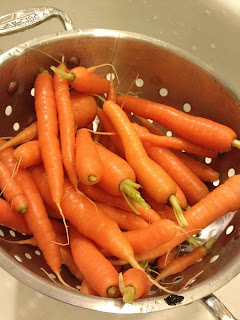 Waste not: the usual - kitchen scraps to the chickens and compost, egg shells saved for birds
Want not: 40 lbs of frozen chicken feet for stock, enough coffee beans for a couple months (I might have to move to the PNW just for their unfairly good prices and selection of ethical coffee. That, and the greenness. I <3 it.)
Eat the Food: the stuff we're harvesting, plus preserves, squash, a few dehydrated veggies
Build community food systems: nope
Skill up: nothing 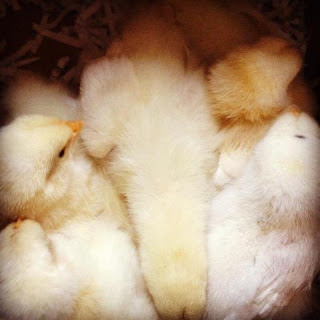 We also got 8 new chicks yesterday. They should be ready to move outside about the same time the older group is ready for processing or integrating with the flock (for the one's we're keeping). We are becoming the local chick-takers for friends (or friends of friends) who hatch them out for school projects. We just make sure they know up front that all roosters and probably some hens are destined for the soup pot. We are also offering some of the hens to people who are interested in keeping chickens. On the downside, we never know how many hens or what breeds we'll get. On the upside - free birds!

How is your garden coming along?
Posted by Lily at 6:00 AM

Been reading this blog for awhile but i have been lazy to drop a comment and say thanks. That ends nowadays: Thanks mate!

Ha! I am completely behind on my IDC postings...can't seem to gather myself enough to write a proper post about what's been going on :-(

Anyhow, no worries about having things to do and beds to clean up...I think similar things every time I walk into the garden. I've come to release the idea of a perfect garden and have instead begun to look at it as simply a work in progress that is never done, but it (instead) continually evolving.

Enjoy the process, be kind to yourself and allow yourself to be excited about all that you are accomplishing :-

Hope you're having a great weekend!

Thanks so much for posting these kinds of things. Honesty is so valuable. I can really, really relate to this. I can never do everything I want to do or set out to do. I'm constantly struggling with feeling like a failure. And darn that lettuce for bolting before we can maximize on it!

Your chosen life is a challenging one but you're doing amazing!