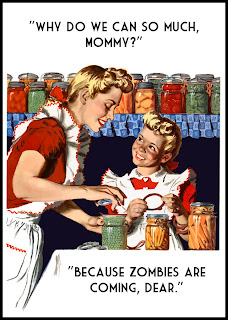 The first part of this post was originally posted as a comment on this blog post at Becoming Peculiar (I've made a few minor edits so it will make sense here, by itself). The second part is in response to a more recent post of Kathleen's revisiting the idea of minimalism, specifically food storage. I started to reply on her blog again, but it was getting long, so I'm putting it here.

Part One: Thoughts on Minimalism vs. Simplicity


I am striving toward simplicity, but I don’t think I’ll ever succeed at minimalism. I actually find it really frustrating because I feel like in order to live how we’d like to, especially in regards to diet (growing much of our food, whole foods, food preservation), we actually need and use quite a bit of stuff. I have 4 canners, a dehydrator, two grain mills, a super blender, a kitchen aid, a food processor, two freezers, two large stock pots, multiple smaller pots and pans, plus untold numbers of bowls/dishes/utensils/small electrics. But the thing is – I use almost all of them. I could do it with less, but I would be a lot less inclined to get it done and I would be a lot more inefficient. And that’s just in the kitchen. The garden is a whole ‘nother thing.

We keep animals and I try to keep at least a month’s worth of feed for everyone on hand all the time (given the possibility of natural and man-made disasters, the fact that we live in earthquake country, and the state and federal emergency response guidelines I think it is only responsible to do so. Animals need to eat in emergencies too.). That has to be stored. Plus equipment, bedding, first aid supplies, etc., etc., etc. This is in addition to the food storage I keep for people.

And, I am rather addicted to books. I am okay with donating non-favorite novels when I’m done with them, but books on cooking, gardening/farming, reference, faith, parenting, history, and classics are practically impossible for me to part with. A house without books is not a home in which I want to live.

So in short, in my experience so far, simplicity and minimalism are not always good dance partners. And I’m conflicted as to whether Jesus calls us to one or the other, I can see evidence of both. 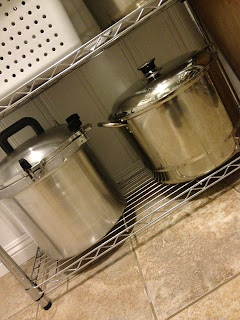 Part Two: Sharing and What our Stuff Stands For

I adore the idea of sharing. I think that is a fantastic way of accessing equipment we might need infrequently or irregularly. And I think pooling resources is one of the best benefits of living in community. There are some smaller, rural communities, as well as some progressively minded more urban communities who have created opportunities for sharing in the form of equipment libraries, besides the informal peer-to-peer sharing that naturally occurs amongst like-mined individuals. I am much more inclined toward the idea of resilient communities for which Sharon Astky and Kathy Harrison advocate, as opposed to the elusive and usually unrealistic "self-sufficiency" that is so popular among preppers.

But that said, I think many of the things that Kathleen specifically mentions (especially kitchen and food preservation equipment) are things that people who are committed to from-scratch cooking and/or food preservation, with the goal of making it a significant portion of their family's diet, use regularly and nearly year-round - which makes sharing more challenging. This is compounded for many of us in that we lack a community of like-minded individuals nearby with whom to pool resources. And so a certain amount stuff feels inevitable.

As to Kathleen's second question - "are they merely status symbols, or sources of self-validation or a sense of security? Or are they really valuable tools?" Well, yes. In all fairness, much of what we have are valuable tools, but they also contribute to a sense of security. I don’t necessarily think that is a bad thing per say. That sense of security can breed generosity, if we so allow it. And some possessions, it could be argued, are also status-symbols. I think maybe the difference between just a status symbol and a tool is use. If you own a 6-quart Kitchen Aid but only use it 3 times a year to make a batch of cookies, that's a status symbol. But if you use it several times a week to make basics like bread or pasta for your family and to share with others, it's a tool. Could those things be done without the KA? Yes. But for a lot of us the extra time or strength or whatever that would be required to make the same thing by hand would dissuade us from making it in the first place. [Truth in advertising: my KA needs to be replaced, and so it is sitting unused and would therefore solidly qualify as a status symbol at the time of this writing.] I also think we need to be cautious of conflating the ideas of "status" and "quality". Bri and I do admittedly own a number of tools that would be considered high-end. However, after a lot of research (and several hard lessons in letting price be the deciding factor) the same things that some people might perceive as status symbols were a purchase decision based on long-term durability and quality. Should we automatically go for the most expensive item we can afford? No. But we also should not assume that someone made that purchase purely on status motives.

Kathleen's third question deals with quantity: "In terms of things like equipment, am I going beyond what I can reasonably use myself? Could someone else benefit from it more than me?" We definitely have more than we need and certainly have more than we can use of some items. I know this and have been making a concerted effort to par down recently. To get rid of the stuff I don’t use at all and to critically evaluate the need for the rest of it. Not just in the kitchen, but also clothes, books, etc. Purging crap we don't need is so cathartic.

"Stuff" has become something of a swear word in our house [proper spelling: st*ff]. I'm still struggling with wanting to have the things I need and use (and yes, enjoy) verse the frequent urge to purge it all and live in a tiny house.
Posted by Lily at 4:24 AM

Thanks for your thoughts, Lily! Lots to think about here.

I'm definitely discovering the value of quality -- as in, I'm starting to discover how worthwhile it is to save up for quality items that will last, especially in terms of kitchen tools. Some might feel that these expensive items are status symbols, but I'm with you: these items often enable us to do things we couldn't/wouldn't do otherwise, helping us to create healthier food for much less.

And I share your experience, where I love the idea of sharing things in common, but lack the community. I like what Sharon Astyk has to say on the subject in Independence Days: while no one else realizes they need these things, it might be up to a select few of us to own them, for when the time comes that we discover we do, as a community, need them. (Things like deydrators and canners and the like).

I'm also still fleshing out my thoughts on security. I remember being taught, as a child, that we should put out trust in God, not worrying about tomorrow because tomorrow will take care of itself. Instead of storing things on earth, we need to store up treasures in heaven. So I've always had this sense that we shouldn't find our security in stockpiling for the future. To a certain extent, I still believe this, so the word "security" still makes me feel uneasy. I'm trying to balance this idea of "finding my security in Christ" and establishing a certain amount of security for hard times, as Astyk explores.

Anyway, thanks for having gotten me started on this conversation. It's an interesting one!