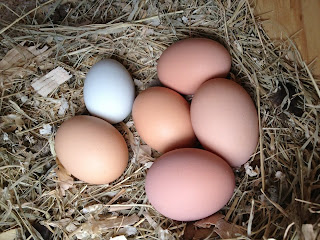 One of the biggest challenges in gardening for food and not just fun, is ironically, the food. Or at least I am finding that to be the case for me. I grew up with small gardens, and have grown something no matter where I lived as an adult. But it is only in the last year that we have really started growing FOOD. Enough that it has made a substantial difference in my shopping cart. And that has actually been really difficult for me. Until 2011, even though we have had a garden for the past few years, I still bought most of our fruits and veggies. The garden gave us enough tomatoes for fresh eating and a handful of other veggies and herbs, but never a real abundance of any one thing (except chard that one time). Now all of a sudden we have more vegetables than we can keep up with and I have on several occasions had to remind myself that I shouldn't be purchasing vegetable X, because we have more than enough of vegetable W at home that needs eating. 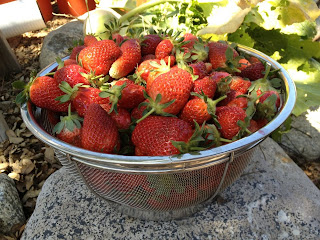 Part of the problem is that I’m a natural hoarder saver, so I tend to want to save things we grow for “later”. When is “later” again? Losing a basket of precious strawberries to mold less than 48 hours after picking is helping to break me of this habit (not that that is the only thing we've lost to our "later" mentality, not by far). But I’m not just fighting myself on this one. Bri is guilty of the same propensity. So learning to eat or preserve the bounty of our land as it comes is a lesson that we seem intent on learning the hard way. 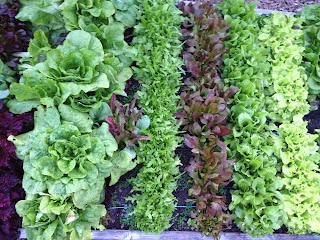 Another facet that is challenging me is that, while I love most of the things we grow, I've had a complete mental block on using them, especially of late. The last time I made or ate a salad was for a potluck two weeks ago. Given that we have a bed and half of lettuce, half a bed of spinach, and a bed of chards and kales, that is ridiculous. I should be eating salad every. single. day. 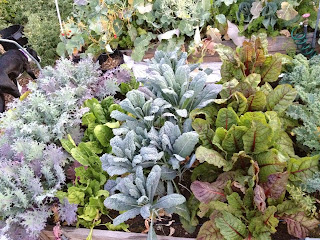 I think, in part, our schedules are depressing me. Bri and I both work night shift right now and on top of that we work different days, so that we only have one day off every other week together (if one of us is not called in for overtime). This brings up two obstacles. First, while I love food, I love it more when I can share it with other people, especially Bri. So eating half my meals at work and then most of the rest at home by myself is less than fully inspiring. And secondly, while I don’t mind night shift as far as work is concerned, I’m beginning to loath it on a life basis. It jacks up my sleep schedule, but more to the point, it jacks up my awake schedule, which means I don't work around the homestead as I’d prefer on my days off. I can get away with vacuuming at two in the morning (although we’re pretty sure the neighbors probably suspect us of being on some sort of illicit substance…), but gardening is less enjoyable when you have to wear a headlamp (I’ve done it, I’m just saying it’s not really ideal). Plus, there are things to be done that are approximately 1000 times easier to accomplish with two people, rather than alone. 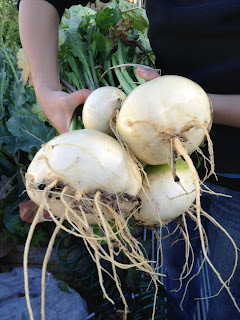 I’m not writing this for the purpose of complaining or making excuses. Rather, I wanted to articulate some of the challenges I am facing so that I can better address them. I also want some accountability. As such, I am going to start participating in Sharon Astyk’s Independence Days Challenge. I am also challenging myself to eat something from the garden every day, which I’ll post to twitter (you can see my feed on my sidebar). My first IDC is below. 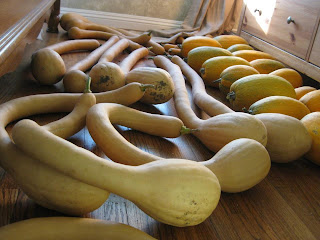 Plant something: I transplanted pepper starts this past week, but nothing new from seed.

Want not: stocked up on organic sugar (found for $1.3/lb) and maple syrup

Eat the Food: we do an okay job eating preserves (mostly in yogurt), but a severe lack of this is what this post has mostly been about…

Build community food systems: I graduated from my Master Food Preserver class this week. The skills were not really new to me, which is why I didn’t put this in the next section, but it is a great way to get more involved in the local food community.

Skill up: I have several things that I have started learning, but at which I am not currently working and that needs to change.

What mental hurdles are you facing in your quest for a more sustainable life?

Aside from your work schedule, I could have written this post. So thank you for saying out loud what I've been thinking in my head. Becoming more intentional with what we do on our own little urban farm has required a huge shift in how we approach things and it's a huge learning curve. I throw more harvests in the compost than I'm proud of and never feel like there's enough time to get everything done that "needs" to be done. From what I continually read here, you are doing a phenomenal job! We're all taking one step at a time, which means forward movement, and every single step is a step in the right direction ;-)

Welcome to the Challenge! It has really helped me see that all the little things we're doing definitely add up! I look forward to reading more about what you've been up to and hope it will also help you see all the good that you're doing :-)

I wonder what role a little (emphasis on little) farmers market could play in helping you use what is harvested?

I know it would only add to your obligation load, but perhaps Riverbend Commons could help ensure things are not wasted, as much, and it could ease your mind.

I know John and I would come over and pick up produce...hmmm...

great post! these hard to articulate mental hurdles are so important! everything depends on them, but how-to information hardly ever addresses them. good on ya for outing your challenges, and keeping at it.

Bee Girl - thanks for the encouragement! The birds and the compost are the only things that make me feel marginally better about unused food; at least it's not *really* wasted that way, right? And no, there is never ever enough time.

Priscella - honestly, at this point the idea of a market is overwhelming. I stressed out way too much over the sad little seedlings as it was. Not that I want stuff to go unused. I wish we had more of a barter culture around us, I'd love to trade for goods or services.